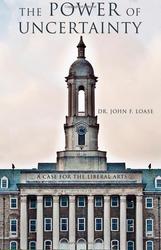 The new book by Dr. John Loase, "The Power of Uncertainty - A Case for the Liberal Arts," demonstrates the positive effects of recognizing and appreciating the illumination we could experience in recognizing and admitting uncertainty in all human endeavors. This valuable new book illuminates uncertainty in many areas, including a variety of mathematical and scientific ideas and extends to the recognition of the human advantage implicit in questioning our certitude regarding, for example, our religious beliefs (or total non-beliefs), the dangerousness of our many prejudices and convictions concerning free will or the capacity for redemption or progress of those "other" human beings or nations that we often conclude are so really "different" from ourselves. The richness of his examples and arguments inevitably leads to a discussion of the meaning, power and all-encompassing humanity of philosophy, literature, film, as well as all the arts, because respecting and understanding the expressions of all mankind truly unfastens the binding chains of our often unchallenged assurances and prejudices. (Louis Rotando)

Upon receiving the request to read and review “The power of uncertainty: a case for the liberal arts” by author Dr. John F. Loase, I scanned over the synopsis, and will admit I was quite giddy about receiving a copy to review as it correlated directly to the intellectually eye opening books that I’ve acquired an insatiable addiction for along my journey through life. Once received I began my unknown adventure down yet another rabbit hole in hopes for the knowledge I consistently seek and with that my personal analysis of Dr. Loases’s work.

A WARNING to those who aren’t proficient in the mayhem of mathematics or have achieved levels of advanced mathematics, for the first half of this book may be intimidating in accordance to the author’s brilliant grasp on mathematics. The first half of the book, to me, felt haphazardly chaotic especially for the necessary crucial incubation period the reader needs to acclimate to the authors writing style thought processes and establish a fluid flow in the beginning of any book, but perhaps this was the authors devious intention to break away, if at all, any self-certainty the reader may possess through a hardwired lifetime of mislead academia. Admittedly the transition between thoughts and equations was difficult to navigate, I wasn’t quite sure how the math coincided with the remainder of the book, although personally this could just be my deficiency being as I did not accomplished more mathematically than  basic college level mathematics with merely more than a passing grade. Despite my lacking of mathematical magic I fortunately, to a certain degree, did understand what the author was attempting to portray and wish I had the ability to decipher the ultimate coded message the author was encrypting.

If  the reader has survived thus far to Part 2 of the book, the intense illustrative equations begin to subside giving the reader an essence of sitting with the author though a lecture of mathematical insight for those who lack proficiency. Once educated the reader finally has reached the authors well of wisdom! The part of the book I personally persevered to endeavor. The rewarding words of wisdom bring solace to any “mathphobe”. The finale of the book was the very treasure I had hoped would be awaiting my heroic arrival after slaying relentless hordes of mathematical manipulation coupled with brain bending equations, again… I am not proficient in the art of math. For those highly educated or those closet case math lovers this book will most certainly be an insightful delight, but by this point the author will have challenged the reader’s efficacy of certainty.

I especially appreciate the author’s vast array of vocabulary versed writing style which further encapsulates his proficient prowess on the topic the author grants to the reader which results in an exceptionally facilitated read. I would also like to add my esteemed pleasure in the additional material of other works of art, be it film, articles, or other books to help the reader broaden their perceived perspective of their existence, for this I am always appreciative to all authors who allow the exchange of various wisdoms.In closing I would like to summarize this book through an analogy that I visualized while attempting to place into words the validity of this book which portrays as such.

“Upon engaging the read of this book I felt as though I was blindfolded, knocked unconscious and awoken to being tossed from an aircraft into the middle of a turbulent sea for which I was only given a life preserver ring and a signal flare. At any moment I could signal this flare and be withdrawn defeated from this wrath, but I refused and fought forward until finally I washed ashore upon a vivacious isle of victory to witness the dark clouds of ignorance retreating to permit the enlightening glow of knowledge that cascaded my reward, illuminating the path to further wisdom.”

I do humbly thank you for reading this review.
Loading...